Here’s to the ones who want some space.

A year ago, I hesitated to capture my “2017” and to send a letter to friends and family, as is customary and I like to do at least once a year. I repeated the same cycle this year: why am I writing an end-of-year letter if I don’t support the notion of the year as everyone’s best cycle? I do it, because I like it, not because I’m obligated. (End-of-year letter coming soon.)

Is a month four weeks or 30/31 days?
When does the morning end?
Who decides when summer begins?
What determines lunch time?
Why do calendar years matter?

That “bad week,” that “bad day,” that “not my year,” could end sooner. That “good week,” that “good day,” that “breakout year” (ha! Don’t read the news…) can also continue long past its deadline. Days, weeks, months, seasons, and years help us define the way we live and work. We structure the phases of the world around us categorically, so that we can work and speak similarly. When candles insufficiently measured and tracked time, humans invented clocks and calendars to mark the moments. The fact that they help us means they can also hurt. Each of us has a separate experience of the world. Defining a personal relationship with time puts us in control of our attitude and our energy. Clocks revolve, and humans evolve, too.

People keep asking me “what are you doing for New Year’s Eve?”

Like with most questions that seem straightforward, my answer is complex. I thought about finding a group of friends, maybe going somewhere to celebrate. Friends in Berlin have invited me to join their celebrations. I’ve decided to abstain. I want a normal night of rest. What I really want is to go someplace in nature, escape to a coast, a mountaintop, an overlook, and just be for a few hours, then return to the everyday routine. I didn’t find or create that opportunity for myself yet. I feel silly to celebrate midnight, an opportunity we have with every turn of the Earth, yet we arbitrarily relish only once every 365 opportunities. So, as of now, I’m going to go to bed Monday and wake up Tuesday at my normal times.

We have created a social construct that pretends the new calendar year presents a unique reset button, and that life is suddenly renewed with the turn of the clock and the drop of a ball. Yes, we made it. 2018 is over. 2019 is imminent. Can time so precariously dictate our attitudes? Does happiness come from within us or from the world around us, from a calendar and clock?

Here’s my prediction: at the end of 2019, we’re going to chalk it up to a wash and say “thank God, 2020 is here! Now we can start transforming ourselves.” Why bother, if we know it’s going to be regrettable?

My aim is to wash myself of that attitude and receive every present moment as the opportunity to check in, to choose my attitude, to reflect on my congruity with my world, to exercise self awareness. The difference between January 1 and September 19 is a simple thought. Both are equal opportunities to start, to end, to continue. We – as individuals – come to an intersection and have a chance to pause, to turn, to continue without stopping when we choose to reach that point. This is my captain – me – speaking to my craft and my crew and my cargo – also me: do what suits me. Go or stay when and where I feel compelled. Be who I am.

Here’s my invitation – to you and to myself:

We can’t all start shining on New Year’s Day. If you’re glowing already, why not continue? And if you want to glow, start when you’re ready.

Here’s to this moment and the next, separated only by our minds.

I gently giggled when the woman in front of me proudly announced to the German border police: “I’m here with my son to see the Christmas markets.” Doesn’t she know that Germans aren’t so forward or friendly?

“Oh, really,” he smiled. “Do you not have the same markets and shopping in the US?”

“No, we don’t,” she responded. “We’ve been planning this trip for five years.”

While Mom told me that mothers have eyes in the back of their head, it was this mother’s smile that I could see from behind.

The elderly couple in front of me shuffled their feet toward the counter next.

“Das ist meine Frau, und wir sind hier für die Weinachtsmarktes.” (This is my wife, and we’re here for the Christmas markets.) They continued the conversation, split between the husband’s German and his wife’s broken English.

With my turn to show my passport, I wondered if I needed to announce to the border agent that I was merely returning to work after spending Thanksgiving in the States and I was not entering Germany for the Christmas markets like everyone else (apparently). This pattern gave me pause: maybe I shouldn’t take for granted the multitude of Christmas celebrations while I live in Germany. I generally feel that outside of work I live a cozy life with minimal rush to explore the quintessential cultural and touristic sites, and I like the fact that foreign discoveries fold into my day-to-day rather than separated as distinct experiences.

While it’s not the best known in Germany by any measure – I’m looking at you, Nürnberg – Berlin hosts dozens of Christmas markets. Some last the duration of advent, others only weekends, and still others pop up just for one weekend. Many of the markets in the center of town – Alexanderplatz has two – host a kitschy flavor of Christmas with vendors that repeat a similar mix of Christmas decoration, alternating with stalls selling glühwein, savory bites including sausages, and sweet treats like Lebkuchen (a gingerbread-esque cookie). Some specialty markets focus on local artisans and designers, and these events are more sensible places to shop for legitimate Christmas gifts. And then you have your one-of-a-kind markets that cultivate a special nostalgia for Christmases past.

Enter: Weinachtsmarkt am Jagdschloss, the “Christmasmarket in the hunting palace”

While glühwein warms the heart regardless of quality, you’re unlikely to be blown away by the actual market – the things to buy. Knowing full well that the best way to experience the Christmas markets is to make plans with friends, one colleague mentioned a market in the forest that would only take place this weekend. Weiwei and I browsed a few markets together last year, so I suggested that for this year’s date we should be atypical and leave the city center. 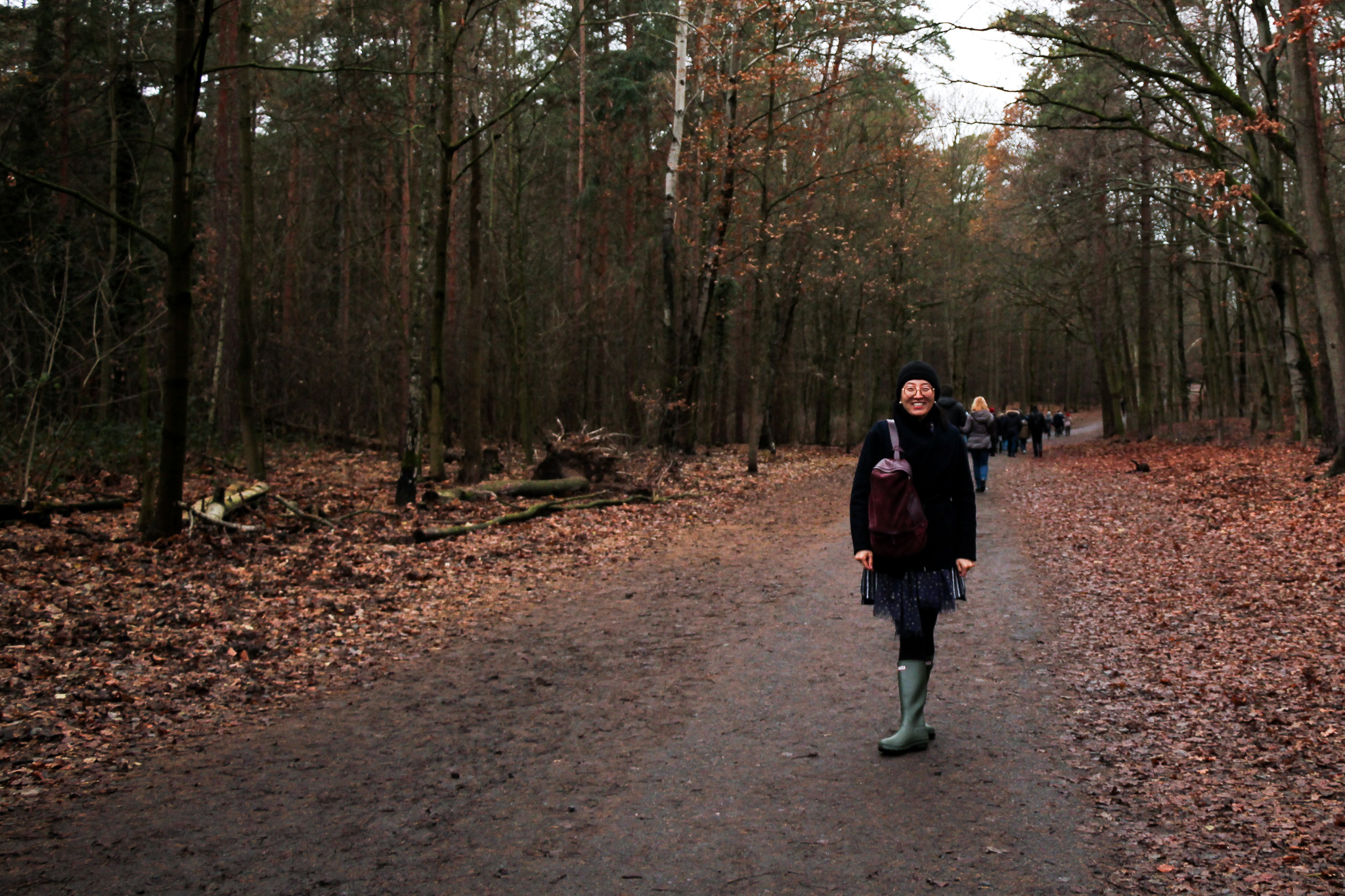 Grunewald is the “green forest” (literal translation) in the lakes region bordering Berlin’s west side (not West Berlin ;). When the weather is warm enough, I favor cycling the journey along Berlin’s central promenades and into the forest, yet I didn’t know the forest played host to a castle or a Christmas Market.

See for yourself: this Sunday afternoon adventure was a one-of-a-kind part of the Christmas season. Combined with the commercial nature of many markets, Berlin is a rather grungy city, so finding a warm, cozy atmosphere in a Christmas market was a truly special discovery. 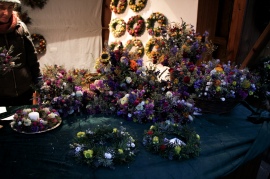 We enjoyed a variety of snacks: a fish cake, caramel cheesecake, glühwein (the quintessential mulled wine), freshly roasted chestnuts, and bratwurst. Actors entertained the kids with a live rendition of Hansel & Gretel. Does it get more German fairy tale than watching the Brothers Grimm in the forest? When dusk fell and the sky faded to black, we stepped into the central house, where the state maintains a museum of antique hunting art and trophies from the time when the property was a Prussian hunting lodge.

After a few hours, with our stomachs full, we followed a cloaked man carrying a lantern back to the bus, on to the train, and returned to the bustle of the concrete jungle. Next time I hear an American announce to the German border police that they came for the Christmas markets, the sparkle in my eye will mark a new appreciation for this special tradition.

a quote to remember