I found some pieces of my heart in Denmark, scattered in every nook and cranny of Denmark’s celebratory air, in the cross-hairs of the two white stripes that adorn a field of red. The Dannebrog wavers on flagpoles against blue skies, spotted with clouds. She hangs neatly from a wooden stick, resting gently on the edge of a basket filled with freshly pressed waffles. A frosted-white cake, ready to be cut, each slice marked by paper banners on wooden toothpicks; the sugary canvas is a LEGO-sized memorial to the pride of a nation. 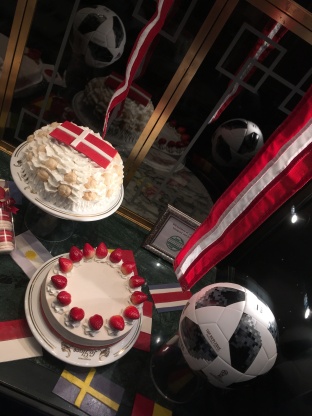 Danes love their flag, and not in a nationalistic sense. Whereas American patriotism has become a visual marker for conservative elitism, and Germans reserve their flag for occasional stately affairs and national sports events, Denmark has elevated their simple red and white banner to a symbol of intimate celebration. The Danish flag welcomes friends and family at the airport for their homecoming; peppers gardens and tabletops during birthday celebrations; stands gently on castles and seaside overlooks; drapes the compassionate hearts of her people, gently bundling them together with a strong white ribbon.

I eat dessert first. Orion is my favorite constellation. I think and care deeply about people and our interactions. View all posts by Stephen Nock

Leave a reply. e.g. what did you learn? Cancel reply

This site uses Akismet to reduce spam. Learn how your comment data is processed.

a quote to remember